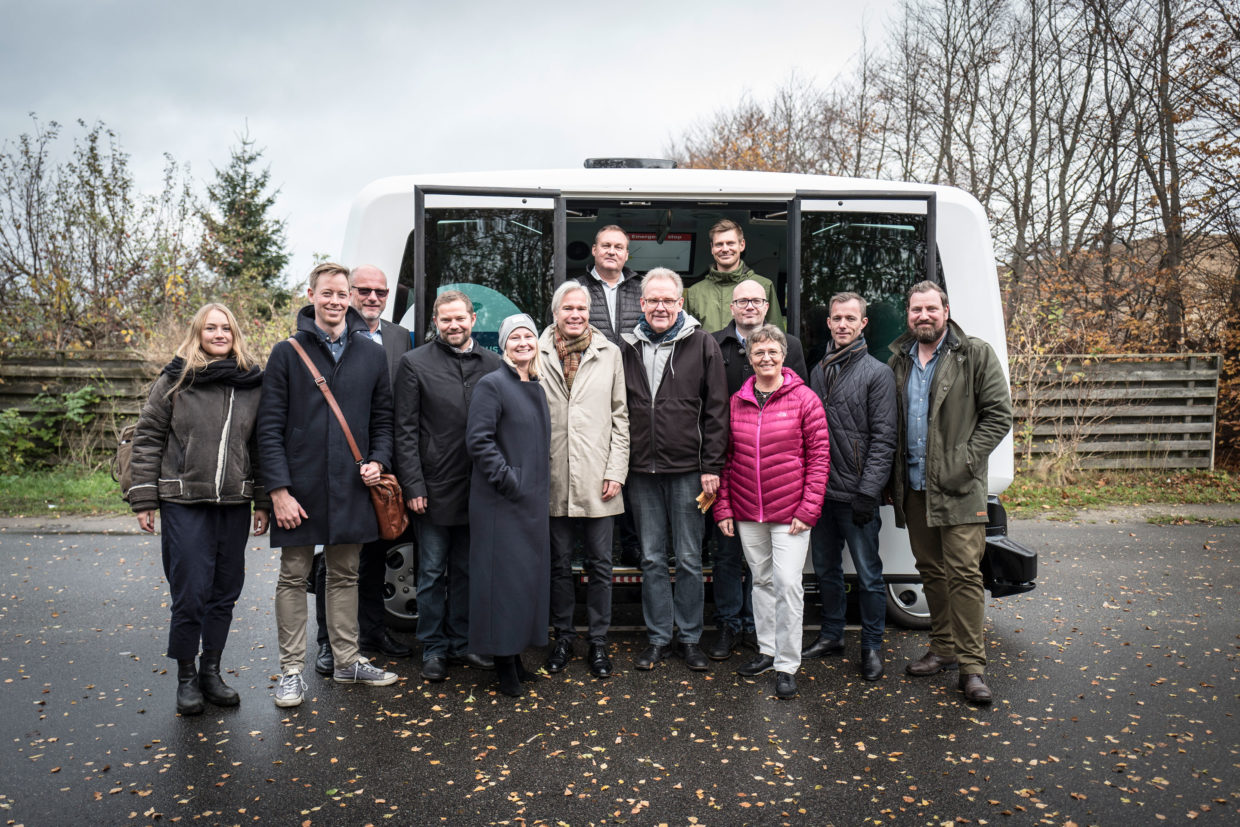 As an important milestone in the LINC project, a driverless shuttle ran its very first test drive in Hersted Business Park in November 2017 as part of the official announcement of the project. In a Danish context, this was one of the first demonstrations of the technology used within an urban environment, and the attention shown from national and regional Danish news media was overwhelming

The first test drive was set up for one morning in November 20178 – and it was a first chance for project participants to try the shuttle and to tell the press about the project. The actual tests with passengers in the LINC project (previously TUPPAC) will begin early 2019, but the pre-testing gave valuable insights on how to plan future routes and program the shuttle. Nobina Denmark is a partner in the project and technical personal from EasyMile, the French maker of autonomous shuttles, programmed the shuttle for the first test drive.

Head of Business Development in Nobina Denmark, Nikolaj Kyhn, states that testing the bus in Hersted Business Park helped create a deeper awareness of what the technology is capable of and what is required when the project will be running three shuttles at two different test-beds.

“The test drive in Hersted Business Park gave us valuable insights into the potentials and limitations of the technology in use, and the infrastructure requirements. This knowledge allows us to be much more specific when planning our routes and operating the vehicles during the project,” Nikolaj Kyhn says.

Intentionally the test route was meant be set up at Nobinas bus depot with a capacity of several hundred busses in Hersted Business Park, but it was problematic because there were too many moving objects – large busses shifting places every hour made digital visualization impossible. A substantial factor, which must be taken into consideration when planning future test routes. Another substantial factor is Danish safety legislation. For instance, an accessor needs to be assigned to verify the basis for a safety clearance, before it can be finally approved by public authorities, as well as Danish law requires a steward to be on board the shuttle at all times.

“During the test we received new ideas on how to make incremental improvement in the process of planning shuttle routes, both in the framework of technology and Danish safety legislation,” Nikolaj Kyhn elaborates.

Planning the next step

The LINC project’s test drive with passengers is scheduled to take place in January 2019 at DTU Campus in Lyngby, and a second test site will be in Hersted Business Park in February 2020. In addition, Copenhagen will be hosting the ITS (Intelligent Traffic Systems) World Congress in September 2018, which will serve as a window of exposure for the LINC project.

At this stage in the project, developers are selecting the best bus materials and vehicle solutions available, preparing to make the next leap forward.

”The next vital step in the project is to conduct a Request of Information from the market  and a bidding procedure regarding vehicles,” Nikolaj Kyhn concludes.

It will not necessarily be the shuttle provided by EasyMile that the project will put in use. In principle it can be any autonomous shuttle manufacturer that fulfils demand for test material. The driverless shuttle is powered by electricity, which makes it a low-noise vehicle with zero CO2 and particle emission. By connecting the driverless shuttles to the future light rail stations in LOOP CITY as a ‘first and last mile’ solution for passengers, the project’s aim is to make even more people use green and collective forms of transport, as well as reducing the overall time spend on transportation. The LOOP CITY light rail between Ishøj and Lyngby is expected to be fully established in 2024.

The project is for now working with the following: