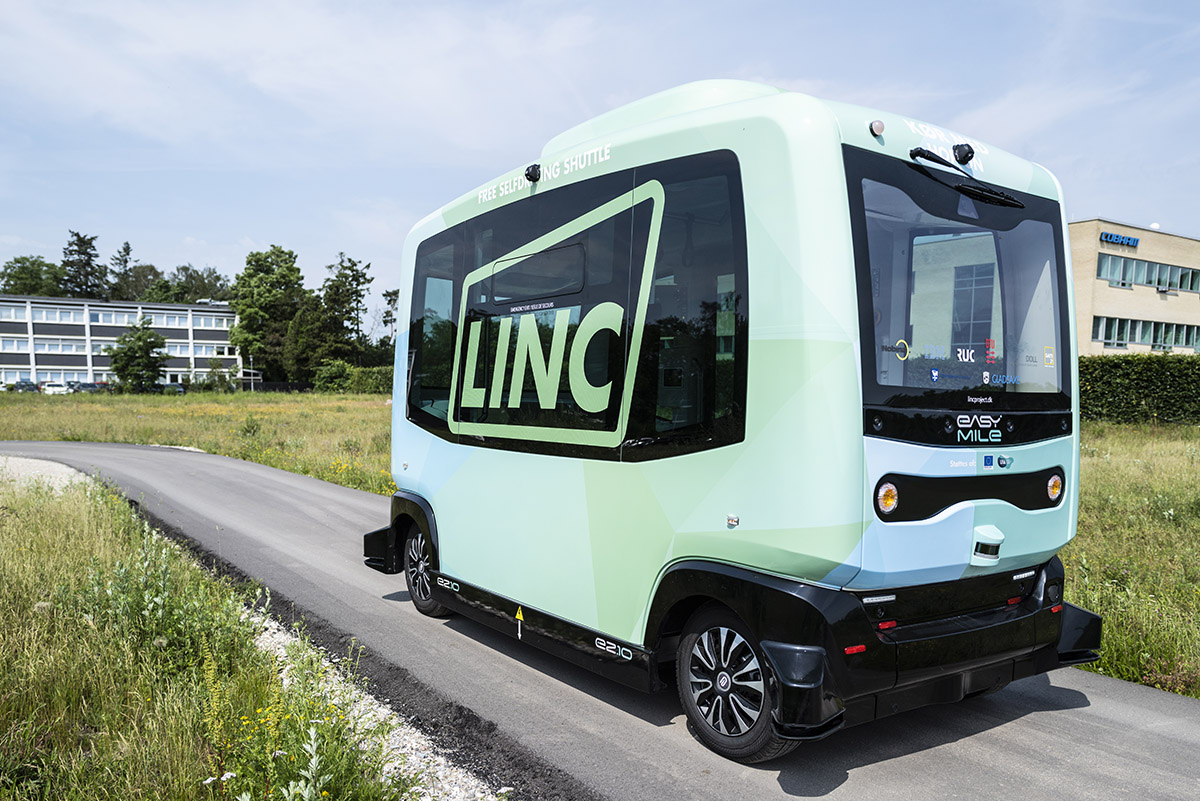 The Danish Road Traffic Authority recently approved three self-driving vehicles for test driving in the LINC project. This is an important milestone in the final approval process before the shuttles can operate within the DTU campus in Lyngby. Furthermore, it is the first time a vehicle from the manufacturer Easymile has been approved in Denmark.

“This is an important step towards our final approval for test driving at the Technical University of Denmark (DTU) campus. Obtaining the approval for the vehicle from Easymile in Denmark has been a long process. For us and for the authorities, it is a completely new type of vehicle that must meet Danish safety requirements for traditional vehicles. Fortunately, we have now obtained the approval of the vehicle and are ready to enter the next phase in the process of being approved for test driving,” said Rasmus Noes, Head of Business Development at Nobina, which will be responsible for operating the self-driving shuttles when the three vehicles in the project are tested for six months at DTU.

The LINC project, facilitated by Gate 21, has been working on getting the vehicle approved in Denmark for a year and a half.

Different standards were a challenge

LINC has chosen self-driving shuttles from the French manufacturer Easymile. Their shuttle has been tested around the world for more than five years. Furthermore, Nobina has well-documented experience with the shuttle in Sweden, where they have tested the shuttle in Stockholm. There, it is currently in regular service in the urban development area Barkarby.

“We have come up against several challenges in the process of getting the vehicle approved for testing. We have provided comprehensive documentation for the self-driving Easymile shuttle, which should live up to Danish vehicle standards. It has been particularly time consuming to obtain the correct documentation for electromagnetic radiation from the electric shuttles. Fortunately, this has been settled, and the vehicle now meets the Danish requirements,” says Søren Jacobsen, project manager at Nobina, who worked with the application.

This is the first time that the Danish Road Traffic Authority has approved a self-driving shuttle from Easymile for testing in Denmark. The Easymile vehicle is approved for 12 passengers (six sitting and six standing) with a maximum speed of 20 kilometers per hour, for driving on DTU’s campus in Lyngby. The approval only applies to driving undertaken within the project.

One more piece in the overall application

The vehicle approval must now be attached to the overall application for test driving at DTU, after which an assessor must prepare a safety report for both the test and the vehicle. Subsequently, the entire application, which consists of a project and route description, plus a risk assessment and assessor’s safety report, is submitted to the Danish Road Directorate. They will then initiate processing, after which the application must be approved by the Minister of Transport and the Transport Committee within the Danish Parliament.

“Vehicle approval is a really important piece of the overall application. It was the last thing we needed to send for the final application to the Danish Road Directorate,” says Søren Jacobsen.

Securing an approved test of self-driving shuttles in Denmark is a long process, so it is uncertain how long it will take before the final test permit is obtained. An optimistic prediction is that the LINC project will be able to run on DTU Campus later in summer 2020.

About the LINC project

LINC is one of the largest projects with self-driving shuttles in Denmark. The purpose is to develop public transport so that it remains an attractive and green choice for citizens in the future. The vision is that self-driving shuttles can be a last-mile solution in connection with the upcoming light rail along Ring 3 in Greater Copenhagen.

LINC is funded by the partners and the EU program Urban Innovative Actions (UIA), which has contributed DKK 25 million.